Smashing RPG fighting saga about the never-ending bloody battle between immortal Vampires and Werewolves. Become the legendary master of the sword and lead your people to victory in this free online adventure!
WHAT PLAYERS ARE SAYING
★★★★★ “Personally love this game. It is the best vampire vs werewolf PvP.”
★★★★★ “Very addictive game, haven’t stopped playing it since downloading.”
★★★★★ “This game is one of the best I have played. A true legend!”
★★★★★ “Cool game, you can build up your character as well as actually fight other players online. Excellent work!”
ADVENTURE BEGINS
• Decide where you belong: merciless Vampires or fierce Werewolves
• Embark on an epic journey to reclaim the lands of your kingdom
• Complete quests, win gladiator tournaments and crush hordes of enemies
• Fight for justice and get medieval on your foes
EXPERIENCE A TRUE RPG
• Customize your appearance and upgrade your fighting skills
• Loot countless items: swords, armors, projectiles, potions, magic scrolls and more
• Choose from dozens of perks and special abilities
• Collect and grade magic crystals to upgrade your swords and armor
GLOBAL MULTIPLAYER ACTION
• Claim your title of the glorious warrior in the online PVP arena
• Gang up with best twilight fighters to create the most powerful clan
• Win daily tournaments
• Raid your rivals’ lands
ALREADY A FAN?
If you have a question, want to suggest an idea or encountered a problem with the game – we want to hear from you! The game is often updated and we’re always eager to get feedback from our players.
https://www.facebook.com/ClashOfTheDamned
http://clashofthedamned.com
FREQUENTLY ASKED QUESTIONS
http://bit.ly/cotd-faq 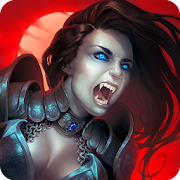